I am Nicolas Kuttler, a DevOps Expert and Technical Leader from France, currently living in Germany more 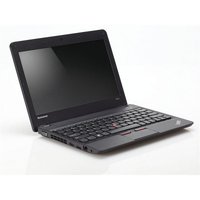 Installing Debian (testing/wheezy) on the X121e (AMD) was pretty easy, but the documentation I found online was a little contradicting and confusing. I encountered a few problems.

Update: You can skip this section if you're using a Linux kernel 3.1.0 or newer.

The Installation notes on the Debian Wiki are correct, I had to add the following code to my /etc/network/interfaces.

man 5 interfaces has more details. You might want to put this code into an init script instead if you plan on using network-manager or similar tools.

Contrary to what the Debian Wiki says, my X121e didn't come with a broadcom wireless card.

So I had to install the firmware-realtek package from the non-free repository.

You'll have to reload the kernel module for the realtek after installing the firmware. It should be rtl8192c_common and/or rtl8192ce. See man 5 modprobe or just reboot.

The X121e has a "generic" sound card, which ALSA thinks it should use by default. Unfortunately that generic card can't produce any sounds.

To fix this I created /etc/asound.conf with the following content:

During the install and after the first boot I only had a 1024x768 resolution, but upgrading to testing gave me the full 1366x768 using the radeon driver. Installing firmware-linux-nonfree is also necessary.

I couldn't get mplayer to use hardware scaling, but for all videos I tried softscaling worked. Not sure though if I could play HD video.

3D acceleration is available by installing the fglrx driver. Basically you have to aptitude install fglrx-driver fglrx-glx fglrx-modules-dkms linux-headers-`uname -r`. After that you can either reboot or take care of the modules and restarting xorg yourself, see the Debian Wiki for details.

The built-in camera works out of the box for me. I tried a skype video chat.

At some point during the install the pointing stick stopped to work. I'm not sure if it was related to xorg or kernel updates, but the full upgrade to testing fixed this problem as well.

On a personal note, I absolutely hate touchpads with built-in buttons. Fortunately Thinkpads still come with the pointing device and additional buttons.

This works fine, but you'll need to use the correct options for s2ram:

Doesn't work for me yet, but I haven't really looked into it.

All in all the Thinkpad X121e is a very nice, portable and affordable Linux laptop. The only real downside I found so far is the built-in speaker, it produces a tinny sound. Having a non-glossy display is great. I'm very happy with the X121e and would even consider using it as my primary laptop if the display resolution was a little better.